skip to main | skip to sidebar

I sort of forgot I had this blog...  Sorry to my followers.

and especially my youtube channel where I've recently added about 25 video pod casts about light pollution. 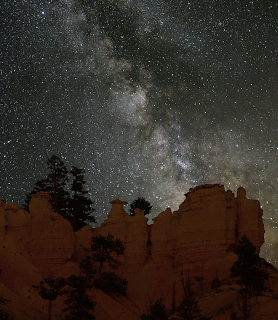 I love the stars. They are and will always be my longest running relationship. I’ve known them longer than I have my wife and children and they will out-live my parents and brothers. I’m often asked “Why are stars so important?” This is not an easy question to answer without practice. I find it similar to being asked why I love a loved one. Too many complicated answers come rushing forward, competing with one another for the honor of being uttered. Isolating one or two of the more simple ones, those easy enough to articulate, fails to convey the intensity of one’s love. And can there be more apprehension or vulnerability than when answering the why’s of ones love? What if, after you’ve bared your soul, the questioner responds with indifference or worse yet disagrees?

It has become an axiom that we are all “star stuff.” And no offense to Carl Sagan, but that’s just physics and chemistry – math-heavy analytical sciences that seldom inspire the “Thank you stars, for making everything possible,” appreciation one might hope for. Alternatively the history and sociology of our connection to these bazilion-ton balls of fusing gas seems to resonate better with those who have not been properly introduced to the stars. The sound byte summary of the following 3-part, 3-minute answer is “Stars made humanity wonder, wander, and wise.”

Wondering what stars were and what could be learned by trying to predict their motion, not only led to astronomy, it also gave birth to science in general. As the mother of all sciences, Astronomy’s first major contribution was helping us distinguish the difference between weather and climate — not an easy concept that still confuses many modern humans to this day. But as hunter-gatherers and later farmers became stargazers, they increasingly won the gamble of staying fed (even when the weather was uncooperative) more times than they lost, and because of this cultures and civilizations flourished.

Understanding the apparent motion of the stars, and in a couple of key instances, their virtual lack of motion, gave civilizations around the globe the confidence to accomplish great feats of navigation. And in spite of the regrettable violence that too often ensued when civilizations found each other, it also became obvious that we could help one another. Trade and exchange was not limited to goods and services, all kinds of knowledge soon wandered between and through cultures and so it was that stars fostered wisdom. Because of this continuous exchange of wisdom, what Newton famously described as “standing on the shoulders of giants,” once the primary secrets of the heavens were unlocked, nothing seemed beyond the reach of science and everything on Earth and beyond became knowable. This was a fundamental shift in the human condition. Since then, despite some malevolent efforts to the contrary, it has always been good to know about stuff.

To say that knowledge is power misses the point because it weaponizes our greatest virtue. It’s far better to emphasize that knowledge is empowering. No form of charity, democracy, capitalism or socialism is as liberating as knowledge. And as I share this philosophy in cyberspace, arguably the most egalitarian tool ever invented, where anybody can command trillions of electrons and their zillions of photons to do his or her bidding, I conclude with Curiosity — the latest Martian Rover.

I will long remember August 2012 as the same bitter-sweet month which brought about the death of Neil Armstrong, the first man to manually make a soft landing on another world; and the alarmingly complex landing sequence of Curiosity — first robotic spacecraft to do the same. Now safely on the surface of Mars, wanders and wonders the wisest machine our species has ever created. At only 15-minutes away, at the speed of light (perhaps the only barrier science cannot overcome) it’s a small step toward the stars, but the next giant leap for mankind. Copious amounts of global goodwill and attention are now directed at Mars, though sadly few in this modern world know in which general direction of the sky to aim such intentions. This is indeed the problem!

All celebrations of Curiosity’s “monumentus” landing and the countless contributions to science this robotic geologist will make, are disingenuous if we fail to also celebrate the 500 generations of stargazers and the very same stars they used to get us this far. This is an easy ritual to do where one can still see the Milky Way from his or her backyard. But elsewhere, where the orange-cream dot of Mars is obscured by the amber gloom of light pollution, more than Curiosity, more than the entire planet that it inhabits, has been lost. It is not a literal loss; not like death. But it is an unpleasant emotional detachment, like divorce, you know they are still there; you just can’t see them anymore.

Over most of the globe, this self-inflicted fading of the universe not only denies us the beauty of the night sky, it also has broken the chain that connects us to the ancients. And as every astronaut knows, when your tether breaks, you lose control of your inertia. Without the guidance and inspiration of the stars, will our science and ambition also float aimlessly? 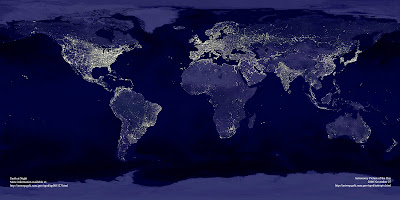 This is your planet at night (if our whole globe was dark at once). All the light you see is either pointed up into space or so overly bright, that even when pointed downward, it still bounces back up into outer space. This unnecessary excess of artificial light is known as "Light Pollution." While this insidious menace comes from bad lights, it doesn’t necessarily come from bad people.

“So, good people of Earth!” We the Dark Rangers implore you, “PLEASE only buy, use, and tolerate night sky friendly lights.”

All light fixtures without a shrouds, motion sensors, and mirrored interiors are bad lights!

I will use this blog to thoroughly describe 9 irrefutable and compelling reasons why you might want to join us in a stand against light pollution. Best of all, these 9 reasons are all wrapped up in a tidy little pneumonic.

Learn more at www.iamthedarkranger.com
Posted by "The Dark Ranger" at 3:02 AM 1 comment:

A little follow through goes a long way.... Hopefully?

Over the past few years attendees to my geology and astronomy programs here at Bryce Canyon National Park have often asked me if I have a blog. Well, now I do! So thanks to all of those who gave me the motivation and let's hope it keeps going!

Perhaps it is premature to state what this blog will be about, but I'm sure at the very least, it will include (whether readers want it to or not) lots of discussion about: 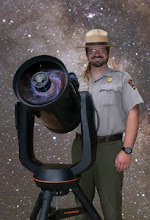